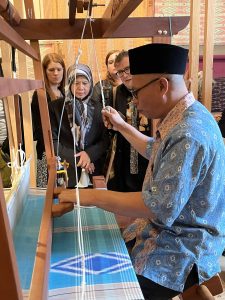 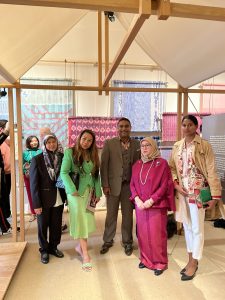 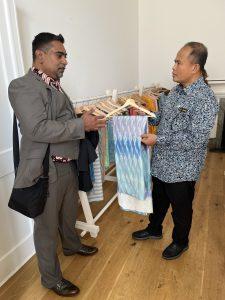 Supporting Malaysia across the globe is at the core of OMalaysia’s values and therefore it was an honour to join Her Majesty Queen Azizah of Malaysia to see the work she is doing to support the traditional Malaysian craft and learn how it is also supporting inmates of Bentong and Penor prisons, two of the largest male-only prisons in Pahang.

The 300-year-old craft of silk weaving – ‘Tenun’ which translates literally to the act of weaving – originates in Pahang, Her Majesty Queen Azizah of Malaysia’s royal seat and the most expansive state of the Malayan Peninsular. It is here the skill of weaving was first introduced by a Bugis migrant.

This craft of weaving that once flourished was nearly lost to Pahang as the number of weavers dwindled to a handful of just 12 in the late 1990s. It was then that HM Queen Azizah took it upon herself to revive this dying craft with a multi-pronged revival strategy which included the training and education of the prison inmates in the technical expertise of this traditional weaving process.

Not only was this skill introduced to the prisons as a form of manual therapy, it was also intended to offer inmates a skilled livelihood, and one that they could rely on once they served their sentence. HM then founded a company, Cheminahsayang, that would offer employment to professional weavers, as well as released inmates trained in this skill of weaving.

Today, a total of 313 weavers live in Pahang, including skilled prison inmates.

The Royal Pahang Weave exhibition, curated by Judith Clark, highlights the prison weaving programme, a display of a traditional floor-loom with a weaver at task, archival fabrics from the Museum of Pahang and a selection of HM Queen Azizah’s own garments and private Tenun collection.

Simon Suresh, founder and CEO of OMalaysia, said he was fascinated to watch a weaver at work and see the most beautiful fabrics made from the weaving programme.

“It was an honour to be invited to the exhibition and to meet Her Majesty Queen Azizah of Malaysia. I have offered my full support of this amazing programme and my team and I will be working with Cheminahsayang on initiatives to help further raise its profile through festivals and online sales in the UK,” adds Simon.

Congratulations to CEO of MATRADE

Posted byadmin0
ILLFORD, UNITED KINGDOM – Halal Street UK & OMalaysia have been shortlisted as a finalist under the ‘Food & Beverage’ category for the Islam Channel... Continue reading

OMalaysia Back At The London Halal Food Festival 2022

Posted byadmin1
This year OMalaysia celebrated its 3rd year participating at the London Halal Food Festival.  The festival attracted over 18,000 people this year after a 2... Continue reading

Posted byadmin0
The Crown Prince of Selangor is commited to help youth entrepreneuers to penetrate the United Kingdom market through a cooperative Memorandum of Understanding (MOU) between... Continue reading

Posted byadmin0
OMalaysia’s warehouse in Leicester was awarded a 5 out of 5  hygiene rating by authorised officers from the Leicester City Council on the 24th of... Continue reading